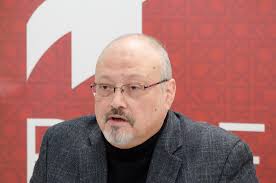 Jamal Khashoggi was ‘killed within 7 minutes’ in ‘disgusting’ audio
Mr Khashoggi was butchered in a “premeditated” murder by hitmen who ‘enjoyed’ what they were doing, Turkey’s Foreign Minister says
https://www.mirror.co.uk/news/world-news/saudi-journalist-jamal-khashoggi-killed-13650312

Putin To Discuss Khashoggi Case With Saudi Prince At G20 In Argentina
https://www.ndtv.com/world-news/putin-to-discuss-khashoggi-case-with-saudi-prince-at-g20-in-argentina-1954888

Clinton: Trump is ‘part of the cover-up’ in Khashoggi killing
https://thehill.com/homenews/administration/418612-clinton-trump-is-part-of-the-coverup-as-to-what-happened-in-khashoggi

My Father Said “What Doesn’t Belong To Us…”: Aaditya Thackeray To NDTV

A day after Uddhav Thackeray’s resignation following a revolt in the Shiv Sena, his son and former minister Aaditya Thackeray