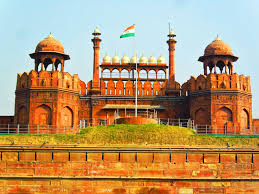 The historic Red Fort in the center of New Delhi has been “adopted” by Indian conglomerate Dalmia Bharat Group, sparking fresh outrage over the government’s mishandling of India’s centuries-old heritage.

As part of a $3.7 million deal, Dalmia will be responsible for keeping the 17th century fort clean and maintaining tourist infrastructure such as signs, toilets and lights for the next five years. A clause in the agreement says the company cannot profit directly from the deal by charging tourists, but Dalmia’s name will appear on signs — giving the company prominence at one of India’s most visited tourist sites.

“We Will Be Back In Some Form”: Trump Leaves White House For Florida – NDTV

Govt ready to suspend implementation of farm laws for 18 months; next meeting on January 22 – Times of India