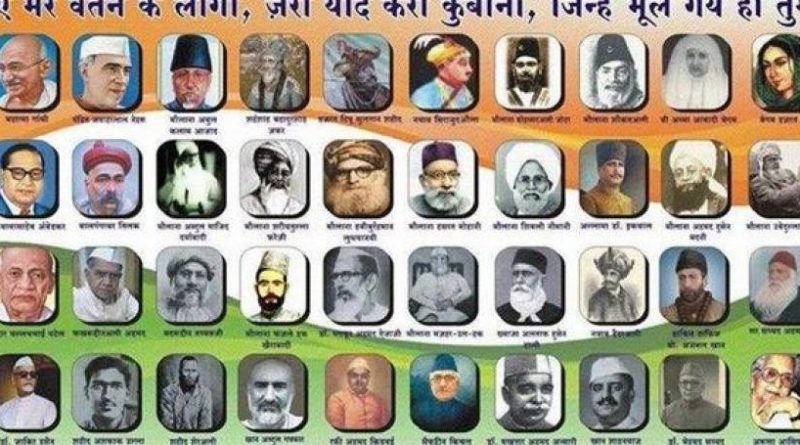 Now, India is a free land, a republic. Many people sacrificed their life to achieve it. But many have been forgotten. Regarding the personality of Maulana Abul Kalam Azad, former President of India, Dr. S. Radhakrishnan, has remarked: “We are too near the tragedy even to make a proper assessment of the great services rendered by Maulana Azad to our freedom movement and to our progress thereafter. He was a great scholar; a self-sacrificing patriot and a statesman. One great thing for which our people have to remember Maulana Azad is his work for India’s unity.” (Maulana Abul Kalam Azad; by Arsh Malsiani, Government of India publication, 1988). This comment is true of almost all Muslims. The great reformer Maulana Syed Abul Aala Maududi was against dividing India. He also stood for a united India with the strong belief that a united India could progress more than a divided India.

The Creator has allowed freedom to mankind for independent thinking and activities – good or bad. It is left to us to keep the limit set by the Creator. Muslims all over the world should help the suffering and destitute people. Since the British were looters and exploiters, they were not considered the legal rulers of India, contrary to Muslim rulers who worked for the Indians and utilised the Indian wealth within the country.

The Freedom Movement in India started from 1782 onwards when Haidar Ali Khan, the Sultan of Mysore, fought against the British. It was carried on by Tippu Sultan, the greatest enemy of the British. At the time of Sultan’s martyrdom British authorities screamed: “We won India”.

The Freedom Movement was strengthened in 1857 beginning with mutiny in the military. The Mughal Emperor, who was reduced to the ruler of Delhi, was the leader of the movement in 1857. Bahadur Shah Zafar was expelled to Burma where he met the end of life.

The role of Muslim fighters was not highlighted as it should have been. Across Indian region the Muslims cooperated with the rest of Indians as they were committed freedom fighters. Bipin Chandra writes: “The positive development within the Congress and within the Muslim League led to the broad political unity among the two, an important role in this being played by Lokmanya Tilak and M.A. Jinnah.” (Advanced History of India, P.420).

When many native rulers found their allies in the British Ruler of Mysore, Tippu Sultan smelt danger in the policy of the British in India. The British were not like Muslim rulers, who utilised the Indian wealth to the benefit of Indians. The British exploited Indian wealth and shifted it to their country, England. Tippu Sultan fought vigorously and bravely, despite cheating from some of his ministers, including the Prime Minister, Purnayya, who was British associate with British rule in Mysore.

Writing on the joint effort of Hindus and Muslims in the Freedom Movement, Pandit Jawaharlal Nehru wrote: “We feel as Asiatic a common bond unity as against the aggression of Europe.” (Autobiography, P.471) Sarojini Naidu considered Jinnah the ‘best ambassador of Hindu-Muslim unity.’ Yet, it was the fanatics who criticised him.

The two major communities, which formed 97 per cent of Indian population, fought together against the British in the beginning. The British realised the ‘danger’ of this unity, and tried to weaken it by playing ‘divide and rule’ policy. They helped Hindu extremists like Hindu Mahasabha, the forerunner of present BJP, RSS, Bajrang Dal and the like. In the book titled Indian Struggle for Independence it is stated: “The nationalist movement and the Hindu-Muslim unity took giant steps forward after the World War I during the agitation against Rowlatt Acts, and the Khilafat and the Non-cooperation Movements. As if to declare before the world the principle of Hindu-Muslim unity in political action Swami Shradhanand, a staunch Arya samajist, was asked by Muslims to preach from the pulpit of Jama Masjid at Delhi, while Dr. Siafudeen Kichlu, a Muslim, was given the keys to the Golden Temple, the Sikh Shrine at Amritsar. The entire country resounded to the cry of ‘Hindu-Muslim ki Jai”. (Bipin Chandra, et al, P.421).

Referring to Hindu-Muslim harmony, Pandit Nehru wrote: “The past of India, with its cultural variety and greatness was a common heritage of all the Indian people, Hindu, Muslim, Christian and others, and their ancestors had helped to build it.” (Discovery of India, P.341).

V.D. Mahajan reviews the social situation in Medieval India and writes: “It is contented that there were many Muslim kings who treated the Hindus well. This was true not only of Akbar, the Great but also of many Muslim kings. Moreover, there were common festivals, common social customs, common literature, common complimentary architecture, etc. among Hindus and Muslims.” (Advanced History of India, P.311, 1990). Instead of communalism people were more united by cultural or racial intimacy. Pandit Nehru remarks: “A Bengali Muslim is far nearer to a Bengali Hindu than he is to a Punjabi Muslim so also with others.” (Discovery of India, P.334).

Summarising the glory of Islam, Gandhiji writes: “Islam’s distinctive contribution to India’s national culture is its unadulterated belief in Oneness of God and a practical application to the truth of brotherhood of man for those who are nominally within its fold.” (The Mind of Gandhi, P.100) by R.K. Prabhu &V.R. Rao)

Gandhiji added; “There is nothing in the Koran (Qur’ān) to warrant the use of force for conversion.” (Ibid, P.100)

Raj Mohan Gandhi, in his Understanding Muslim Mind, has given the contribution of Muslims to freedom movement as well as Hindu-Muslim unity. He has narrated the personality of Sayyid Ahmad Khan, Allama Muhammad Iqbal, Maulana Muhammad Ali, Muhammad Ali Jinnah, Fazlul Haq, Abul Kalam Azad, Liaqat Ali Khan and Dr. Zakir Husain.  Raj Mohan Gandhi quoted a historian who writes: “Hakkim Ajmal Khan’s belief in Hindu-Muslim unity was not a matter of policy, it was a part of his heritage; it was in his blood, and substance of his everyday life.” (Ibid, P.8). Hakkim Ajmal Khan through his speeches continued to preach communal amity. Raj Mohan Gandhi has quoted poet Hali whose works express slogans of Hindu-Muslim unity:

“If you desire the good of your country, / Then do not consider any compatriot a stranger, / Be he a Muslim or a Hindu, / Be he a Buddhist or a Brahmo.”

In 1914, Mazhar-ul-Haq visited England and addressed Indians on ‘Indian Nationalism’, and called both Hindus and Muslims to unite to free their motherland from slavery. Many Muslim leaders worked for Hindu-Muslim unity along with freedom struggle.

After long time harmonious life among the people of India, the British divided Indians into two – Hindus and Muslims. V.D. Mahajan writes: “It was during the British rule in India that Hindu-Muslim riots took place and that also in those areas where the nationalist movement was strong. Between 1889 and 1894 there were about 90 Hindu-Muslim riots. Out of them, there were 44 such riots in Bengal alone, 9 riots in North-Western Provinces and Oudh, 17 in Madras and one in Punjab. The British government encouraged these riots wherever there was great political activity so that the Hindus and the Muslims may start quarrelling and fighting the nationalist movement may get setback.” (Advanced History of India, P.312, S. Chand & Co, 1990)

Google, Microsoft, Amazon, Twitter and Meta are some of the big names among the long-expanding list of companies that have